If that alone isn't frightful enough, for the last ten of them we'd been on the most monstrous bus, not only butt-numbingly uncomfortable, but it played Justin Beiber music videos on loop. Can say with absolute passion that I am not, nor ever will be, a Belieber.

Now we'd arrived in Bagan and it was 4am. A room would be $9 each. There was no way we were about to pay $18 for a night that was nearly over; the only option was to pay for the next night and stay up until 12noon when we could check-in. In the meantime, we decided to get a horse and cart and go and watch the sunrise on a pagoda somewhere…

Incase you didn't know, I'm really not one for idle morning chit chat and the horse and cart driver definitely looked like a waffler.

There were two seats. One next to him and one in the back.

I looked at Katie. She looked back, slight smile. I raised my eyebrows. She had that wicked Holmes' twinkle in her eye…

“It's before 5am, Holmes, and it looks like we have a talker… I'd like to draw to your attention my slight personality defect and request the seat at the…”

“Yes, yes Moreton and I'd like to remind you of the small matter of my HORSE ALLERGY!”

I climbed into the front next to the driver and spent the next 20 minutes travelling at the speed of about 5 miles an hour making the idlest chit chat I've ever made. I explained all about our world trip which required immense gesticulation, the drawing of several pictures and the showing of maps on my ipad. It was a real test of grit and determination.

When we arrived at the pagoda it was still dark and very cold. We collected branches and made a fire. I also spotted the plough in the sky! It was upside down.

I'm running out of adjectives to describe sunrises so I'll just shut up and let you see the pictures: 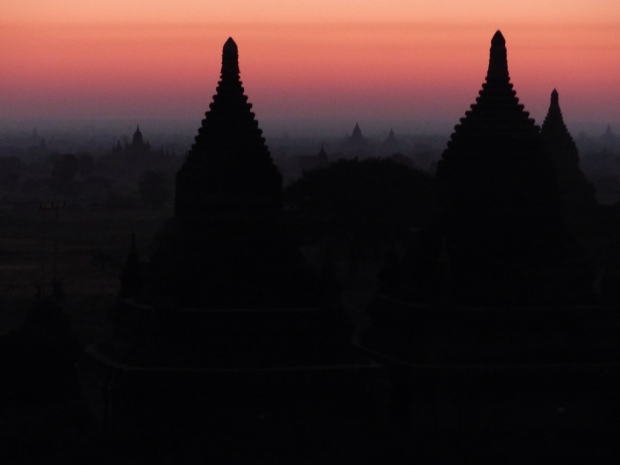 Back on the horse and cart

Twenty minutes of idle chit chat later and we were back at the hostel. It was 7am and we had nowhere to go, so we both fell asleep on some blue plastic garden chairs with slightly broken backs. Almost as if the universe was trying to compensate for the marvels we'd witnessed earlier in the day, we awoke next to a steaming pile of dog poo to find ants biting our feet and the hostel owner telling us they'd accidentally 'resold' our room.

You might be able to imagine the look of destain on my face.

It was now probably about 40 degrees, our bags weighed 15kg, my flip flops were worn down to paper thickness and sharp stones regularly pierced through them and I also had 4 parasols that I'd bought from Inle lake to carry. The prospect of traipsing the streets looking for somewhere else wasn't at all appealing, especially when Bagan is notoriously expensive and booked up. I looked into the hostels worker's face with my wide-frenzy-eyed-desperation-face, nostrils slightly flared and choked out the words, “DO. SOMETHING.”

We eventually got a room.

The next day we hired electric bikes… well, there's a sentence I never thought I'd write.

What's important to remember is Bagan is very hot and very, very sandy and tourists are banned from riding mopeds, which leaves electric bikes as the next best thing. $6 each and we were flying.

Actually, the whole experience has made me really excited about being a pensioner.

It was all great fun until at the hottest part of the day, in the sandiest spot furthest from home, my battery ran out. The bike was so heavy, I couldn't pedal it so I abandoned it under a tree and jumped on the back of Katie's.

We explored many monasteries and pagodas, there are over 4000. Dhamma-yan-gyi Pahto was my favourite. 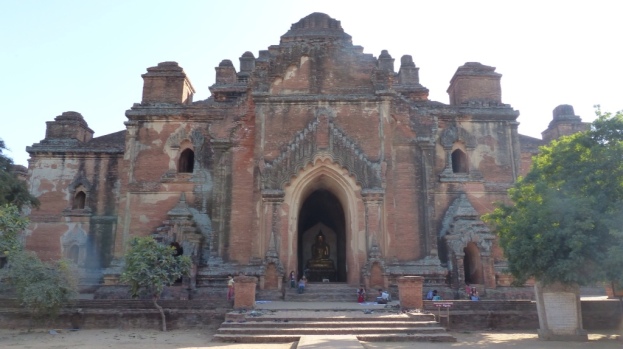 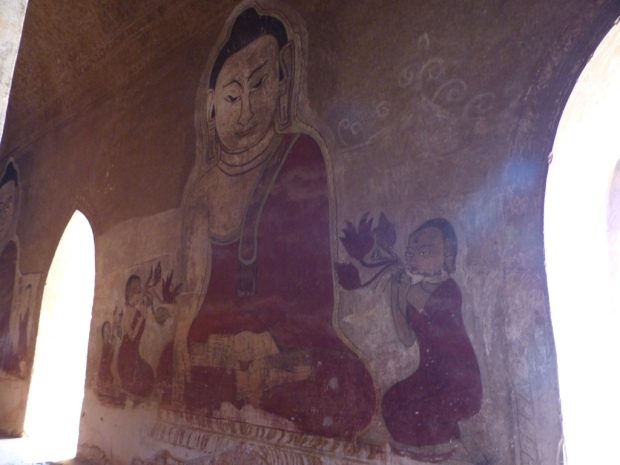 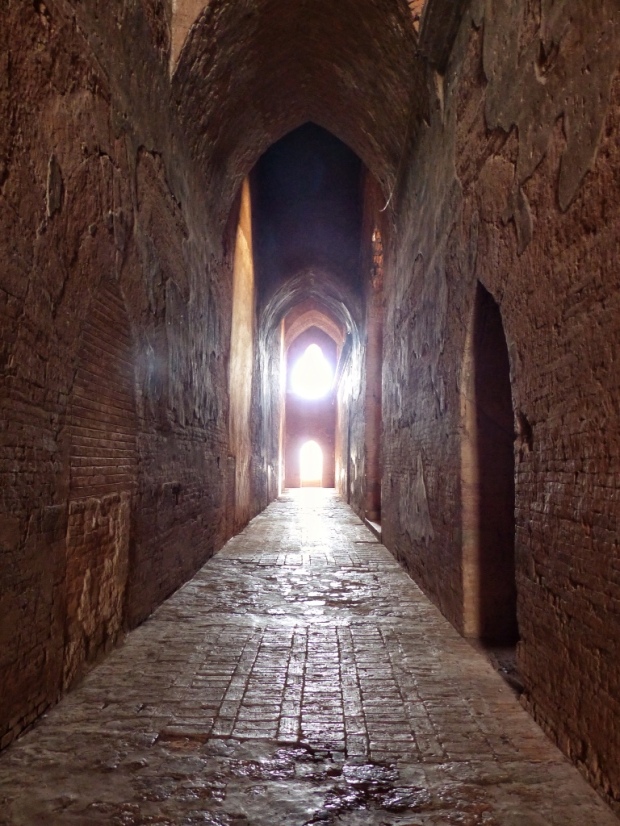 We hired a boat in the evening for $5 each and watched the sunset on the Ayeyarwaddy river. 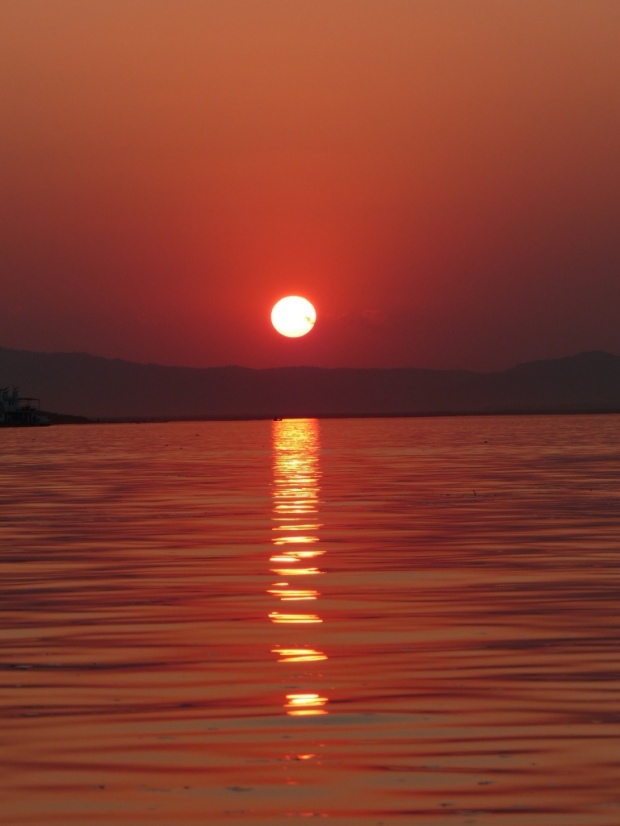 We had three more days in Bagan, during which we visited Mt Popa, a volcano that is 1518 metres above sea level and swarming with aggressive monkeys, which kind of ruined it. How can one appreciate the view with the constant risk of getting mugged by ugly furry creatures, with hands for feet, who'll give you rabies as soon as look at you? 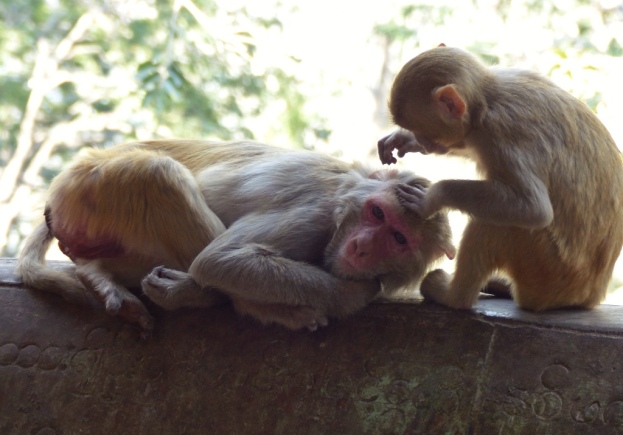 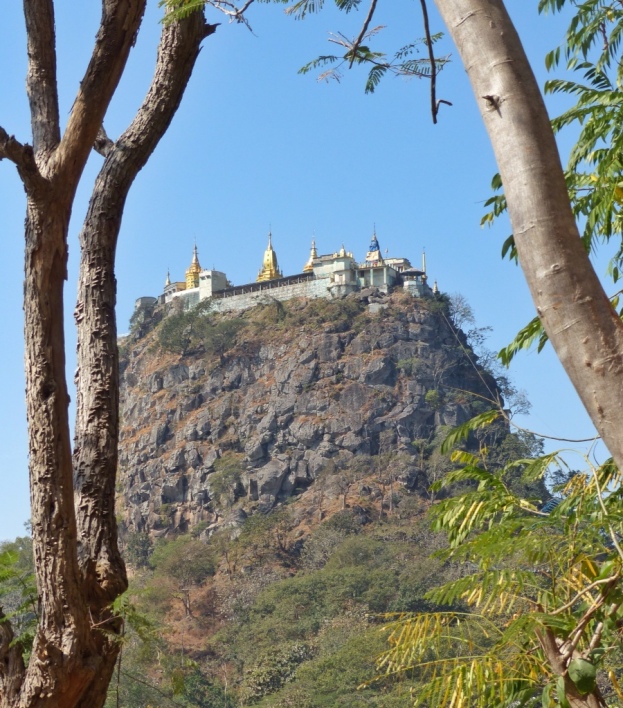 For our last two nights, we checked into the Bagan Princess hotel, with our friends Michelle and Gaye. It was $15 each, but we got a huge buffet breakfast included, free towels, hot water and free use of the pool. We ate so much at breakfast it actually worked out to be cost effective and we didn't have to sit on broken garden chairs next to dog poo.

The day before we left, I hired another electric bike and went out exploring to New Bagan… even took a few snacks in my little basket and tied my scarf around my head to avoid heat stroke…

… AND YES, Jason Moreton, despite the thousands of miles between us I can still see you rolling your eyes and muttering the word GEEK.