Compared to the wonderfully user friendly underground system buying train tickets from Hong Kong to mainland China was surprisingly complicated, made more complicated by the fact that Laura and I didn’t really know where we wanted to go. A few hours (and many drinks) later we decided that Beijing was our next destination and purposefully headed back to the ticket office to find it was shut. We eventually got the tickets the next day but found out the train wasn’t until Thursday, giving us bonus Hong Kong time.

Bonus Hong Kong time allowed us to go to Lantau island, a neighbouring island to Hong Kong, to ride the cable car up to the world’s largest sitting Buddha. Tom from Aberdeen came too, along with Nina from Texas. The Buddha is made from Bronze, weighs 250 tons and sits atop a hillside offering pretty magnificent views. The enterprising locals have turned the surrounding area into a tourist attraction, there’s even a Starbucks at the top. We returned by bus and ferry to say goodbye to Nina who was heading north to a meditation retreat for 10 days. This involves no talking, no external communication and no exercising for 10 days. After getting to know the bubbly, active and chatty Nina I can’t wait to hear how she gets on! 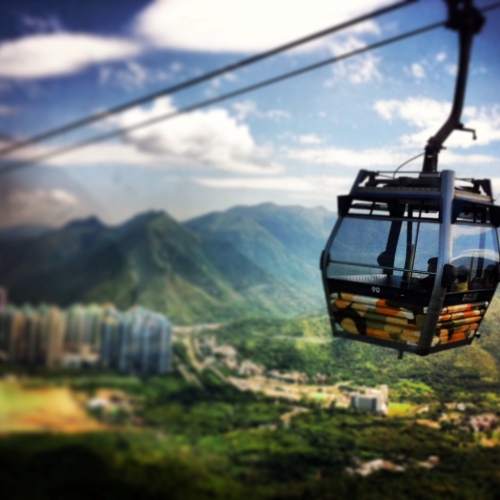 The cable car on Lantau island

The train journey from Hong Kong to Beijing is 24 hours, covering the same distance as going from Lands End to John O’Groats…and back. We chose the hard sleeper option, which meant a cabin with bunks three high on either side and a table in the middle from which we played Downton Abbey on the iPad- quality! The only other occupants were two lovely Chinese girls who shared their snacks of seeds with us. We only realised afterwards that they were spitting out the shells of the seeds, and the giggling that was coming from them was most probably from watching us swallowing them whole. I can highly recommend the sleeper train; it was clean, quiet and we had the best night sleep of our trip so far. The only crappy part (literally) was the toilet. Or I should say, the lack of a toilet. About an hour into our journey I needed the toilet so I ventured out of our cabin down the corridor. When I got to the toilet area I thought I must need to go further down the train as there was no toilet in sight. It was then that I realised the cubicle in front of me had a flush button on the wall and a hole in the ground- this was the toilet. With a bar to hold on to whilst I squatted this may well have been the worst toilet experience of my life. The only joy I could take from it was knowing that Laura would soon have to go too. When I got back to the cabin I only skimmed over the details of the grimness she was about to endure and settled back down. Cunningly I tried my hardest to feed her water but she annoyingly declined and was not in need of the loo until many hours later. When finally she declared she was going to spend a penny I wished her luck and smiled to myself. The look on her face when she returned was a picture and will remain with me for a long time!

Bunking down for the night

We are now in the Dashilar area of Beijing in a courtyard hostel called the three legged frog, down a busy and vibrant Hutong- a type ofmedieval alleyway. Dinner this evening was a feast of spicy beef noodles and beer, costing us the grand total of ¥20- that’s all of £2, I think I’m going to like Beijing! 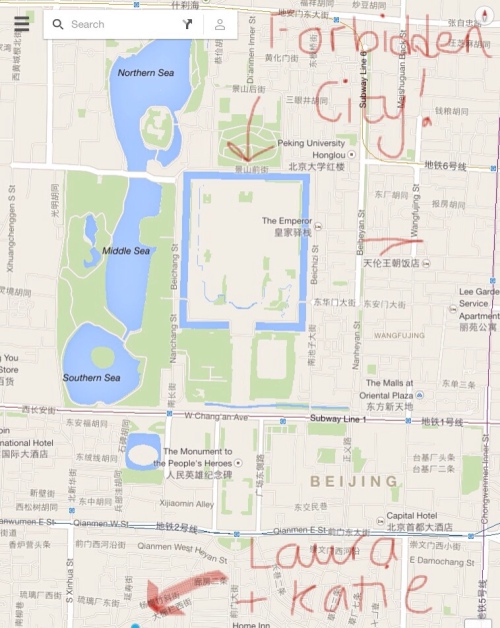 Where we are staying in Beijing

Ps. When I came to upload this blog we realised that along with Facebook and Twitter, WordPress is blocked in China. Thanks to Tommy Holmes and the G man for helping us to get around it!